skip to main | skip to sidebar

Make Do and Mend for Woolsack 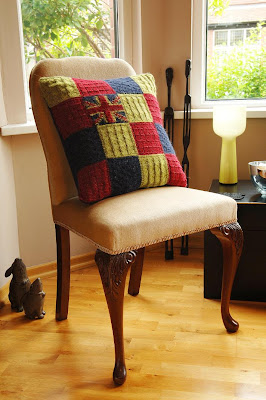 UPDATED: Jan 17th Yikes! In my hurry to get this ready for Woolsack I managed to include a number of howlers in the pdf. The link below now should take you to a (hopefully) more correct version. Sorry to anyone who's been struggling with the previous version.

You may not think that there's much about the London 2012 Games that's going to have anything to do with knitters. This may be because you haven't heard of Woolsack,which has been granted the Inspire mark and is part of the Cultural Olympiad.

The aim of the project is to encourage people- from schools and colleges, community and craft groups, smallholders and farmers, British Wool yarn producers, spinners, dyers and individuals to help to make cushions using British wool, which will then be given as welcome gifts from the people of Britain to the visiting Olympic and Paralympic athletes.

It is hoped that making the cushions will help people gain craft skills and also to learn about the production of British Wool, on which the British economy and early industry were originally founded. In this way a wide range of people can be inspired by the 2012 Games, even if not everyone is able to participate directly in sports and athletics.

The cushions are all to be 40cm square, made from British wool yarn and be suitable for stuffing with more pure British sheep's wool before being sewn up- the latter part of this process will happen at 'stuffing events' which participants can either attend or send their cushions to be completed at. Special labels will be attached, along with any personal messages from the makers. The completed cushions will then be offered to the athletes, with any that are left over being donated to charities.

It's a fascinating project that can only raise the profile of the British wool industry, so I was really happy to be asked to help out by modifying my Make Do and Mend pattern so that it will work as a Woolsack cushion. It's available as a PDF for those wishing to contribute to the project, while further details and links to other pattern1s can be found at www.woolsack.org. UPDATE: 1st May 2012. This pattern is no longer available as a free download, but will shortly be available for sale as a full version in my Ravelry Shop.

PS Just to say that the original version of the pattern was published in Knit Now and the rights remain with them at the moment. They've given permission for me to reproduce it in this form to support the Woolsack project, so please only download the pattern if that's what you want to use it for. If you're keen to make one for another purpose, back issues of the magazine are available through Practical Publishing and after the Spring deadline for Woolsack, I'll be making the original version of the pattern available through Ravelry. Thanks!
Posted by AudreysTeaShop at 10:55 AM

AudreysTeaShop
A knitting pattern designer, writer and part-time primary school teacher, I currently juggle work with bringing up my little boy and girl within a stone's throw of the Lake District. Audrey's Tea Shop is the 'if we won the lottery' dream- a fabulous yarn store with a tea shop upstairs, serving home-made cakes and tea in vintage pots with hand-knit cosies. Until the numbers come up, Audrey's Tea Shop is a place to come and share yarny thoughts- you are very welcome to come and share a cuppa!